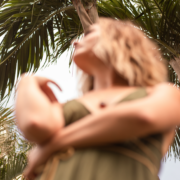 My parents named me Kelly Laurel Van Woerkom. At the time, they thought they were being original. They didn’t realize that Kelly would be the 5th most common girl’s name in America the year I was born. At least my last name was unique, although perhaps too much so. It’s one of those you have to spell every time, and even then most people don’t get it right and definitely can’t pronounce it. I don’t know why, but I’ve never particularly loved my first name. As a kid I wanted to be “Toni” or something else slightly more androgynous. I tried shortening my name to “Lee” but never really liked that either. In middle school, I decided I would be cooler if my name was at least spelled differently, so I changed the spelling to “Kely”. There, I was finally unique! I wasn’t Kelly or Kelli or Kelley, I was Kely! When I started applying to colleges though, I changed it back to Kelly, so I wouldn’t have to explain why I spelled it differently from all my official documents. In High School I changed the spelling of my name to Kely, in order to stand out

The one name I have always loved is my middle name. My parents aren’t exactly sure where it came from. They think maybe my brothers chose it for me. I asked my brothers, but they weren’t sure either. So who knows! What purpose does a middle name serve, anyway? Unless you’re named for someone special, it really just becomes this thing that most people don’t ever use and only your best friends know. It only ever comes out when your mother scolds you as a child. What kind of an association is that?! While it’s unclear who chose it or why, Laurel is the name that I’ve always been most drawn to. Since I was a child, I’ve wanted to adopt it, but I was too afraid.

It’s a weird thing, changing your name. If someone showed up one day and said, “From now on I’d like you to call me Frank,” but you’d always known him as Dave, what would you think? You’d ask him why, you’d have your own opinions about the name, you’d have a hard time not giving him a hard time for it. Who does he think he is, expecting everyone who’s always called him Dave to now start calling him Frank? And yet we do it with nicknames. Little Mikey grows up and starts asking people to call him Michael. Lulu now wants to be known as Lucia. There’s nothing wrong with that, because it’s similar enough that you can remember it. It’s still their given name, just a different form of it. When I was in High School I dated a guy named Levi. Very few people knew his name was actually Benjamin. Levi was his middle name! But no one took issue with it, because he had always been Levi. So why then did I never find the courage to ask people to call me by my middle name? Me and my high school sweetheart, Levi

There were times throughout my life when I seriously considered it. I’d mention it to friends and they’d say time and time again, without fail, “Well, but then everyone would have to get used to calling you something different. It’s just too hard.” So I decided not to inconvenience them. I decided not to welcome the potential ridicule and judgement. Ten years ago I changed my name on Facebook to K Laurel Van Woerkom. I was studying in France at the time and my friends back home thought I had changed my name to sound “more European”. I could have done it then, just marched on ahead and owned it, but instead I backtracked saying “No, I just didn’t want strangers to be able to find me so easily on social media.” Occasionally an acquaintance would message me there and call me Laurel and I’d have to explain to them that my name is actually Kelly. You know, so when we met again in the real world they wouldn’t become confused or embarrassed for calling me the wrong name. It always hurt a little, made me feel a little sheepish. It’s been this strange, in-between thing that I’ve had to explain for years. I received an overwhelming amount of support and encouragement when I finally changed my name.

Over the past two years I’ve made some major life changes. I turned 30 and stopped caring quite so much about what others think of me. I’ve started to uncover the person I want to be, beneath all the crap that society has thrown on me over the years. As I move through this process, I’ve realized that I am Laurel. Laurel is unique, confident, down to earth, and a bit quirky. Laurel is a tree, a symbol of victory in Roman times. I value above all things my connection with nature. I’ve achieved victory in building the life I want, rather than the life others say I should live. I feel connected to this name and wish to carry it forward into the next chapter of my life.

Now I don’t want to discount Kelly entirely. It is, after all, the name my parents gave me, along with all their love. Kelly means bright-headed. Take that as you like. In fact, the photo below could quite accurately describe “bright-headed” in several ways. But just as I’ve outgrown the glasses and my hair is no longer naturally blonde, that name will become a piece of my past. Always a part of me, but no longer in prominence. Kelly will live on in pictures and old letters and stories, but now it’s Laurel’s turn to thrive. So when we meet, I’ll greet you warmly and say “Hi, I’m Laurel. What’s your name?” And you can feel free to answer with whatever your heart desires. My mom and me at 8 years old